Most state constitutions grant state legislatures the authority to redraw state legislative boundaries as do many local government charters. Some states have chosen to delegate this authority either entirely or partially, usually by allowing elected or appointed commissions to establish district boundaries. Other states give courts the final word. Check below for a more in-depth discussion of legislative and citizen redistricting commissions. 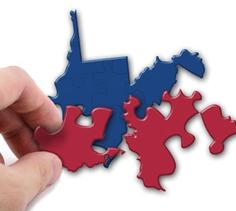