In Shelby County v. Holder, 133 S. Ct. 2612 (2013), the Supreme Court found the coverage formula used to justify Department of Justice oversight over 9 states and a portion of 6 more, “ . . . not sufficiently related to the problem it targets.” A statute designed to prevent discriminatory voting and election practices against minorities was still being enforced in the same jurisdictions that the formula covered in the late 60’s; as it referenced tests, turnout and registration rates from 1964, 1968 and 1972.

The majority opinion noted that these outdated eligibility factors were still being used to determine the biggest offenders of the minority voting franchise without further convincing evidence of continuing need.

A Stale Coverage Formula
The government had tried unsuccessfully to persuade the court that regardless of the freshness date on the coverage formula – it still captured those jurisdictions most likely to infringe on minority rights.  They had argued that the formula itself was not important since it was “reverse-engineered” to achieve the desired list of jurisdictions. However, the court found this reasoning to be fallacious, and invalidated the coverage formula; effectively suspending all preclearance activity until a new formula is agreed upon and passed by congress. Below is a summary of the court’s reasoning taken straight form the court’s majority opinion.

The court first points out that the Voting Rights Act is an exception to the precept of equal sovereignty and preclearance in particular is an “extraordinary departure” from the traditional relationship between the federal government and states. Provisions such as preclearance, which diminish state sovereignty must be “sufficiently related to the problem it targets.”

The court agreed that at the time of passage of the act in 1965, the preclearance provisions of section 5 and the coverage formula were a directly related to the problem of Black voter disenfranchisement. However, the court pointed out that the Act has had great success at curbing the discriminatory activity it sought to eradicate. According to the majority opinion:

2006 Reauthorization (Missed Opportunity)
Reauthorization happened in 2006 without compensating for these dramatic improvements in fact, Congress strengthened the Act in response to its substantial success by renewing the Act for another 25 years, and expanding some of provisions to cover more activity. This strengthening of the Act raised the bar covered jurisdictions must clear even as conditions have dramatically improved, according to the court.

The crux of the government’s argument was that the formula is still relevant because it covers those jurisdictions who still have a record of so-called “2nd generation” discriminatory tactics such as diluting minority votes through gerrymandering. Much of this type of evidence was entered into the congressional record to justify the ongoing need for the Act’s provisions during the 2006 reauthorization process. The court however, felt that none of that type of evidence came close to the “pervasiveness” of 1st generation discriminatory practices, which included literacy tests and tests of moral character as a requirement to vote.

In the end, a plurality of the court believed that the specific wrongs the coverage formula was designed to correct, did not exist in any substantial way and those tactics that may be practiced by jurisdictions today are not sufficiently captured by application of the coverage formula as it is currently formulated. It found that congress did not rely on its own record of evidence that it compiled to modify the formula accordingly. It called this a “fundamental problem” with the formula, and invalidated its further use to enforce section 5 of the Act. 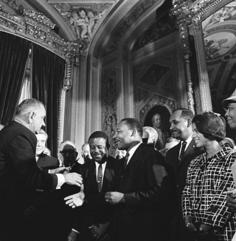 Back to the Shelby County Decision Resource Page