What are Traditional Redistricting Principles?

Since the decennial practice of redistricting began after the "apportionment cases" of the sixties, the process of redrawing district lines for that purpose has generated a set of “traditional” principles or criteria. Each of the criteria below has been recognized by courts (including the Supreme Court) as desirable or at least permissible to abide by when redrawing district lines.

Compactness
Compactness is one of the most basic principles for drawing political districts. Indeed, it just may be the oldest principle as evidenced by the uproar after the unveiling of Elbridge Gerry’s district in 1812.[1]  Courts have recognized this principle in several cases expressly noting that “compactness does have to be one of [redistrictings’] primary goals.”[2]  More recently, compactness has played a central role in minority vote dilution claims and was a key issue in the line of racial gerrymandering cases sparked by the Supreme Court’s Shaw v. Reno decision.[3]

Compactness refers to a districts’ geographic shape and how its interior is dispersed within its boundaries. For instance, a circle is considered to be a perfectly compact shape. In redistricting, the notion of compactness is difficult to evaluate because the line drawer rarely begins with a perfectly compact shape to place districts in. That is, many states and localities already have irregularly shaped borders and boundaries. Moreover, the principle of compactness must compete with other important principles which are discussed below. Thus, the determination of whether a district violates the compactness principle is a complex process based on the interplay of many factors other than geometric shape.

Contiguity
Contiguity simply requires that all parts of a district be physically connected. Practically speaking, it is a district in which one can travel to all parts of without crossing its border.[4] Most state constitutions require contiguity along with compactness in their congressional and legislative districts.[5] Congress had required in its own internal rules contiguity for congressional districts as early as 1842,[6] compactness was required in the Reapportionment Act of 1911[7], but subsequent revisions of the U.S. Code eliminated the language. Courts however have made it clear that contiguity is a de facto requirement for districts provided the geography in question does not include islands.[8]

Contiguity, like compactness can be a matter of degree. Districts can be drawn that are contiguous by way of water or bridge, and two areas of a district may only be contiguous by a small point. Some state constitutions are specific about whether or when water or point contiguity is allowable. 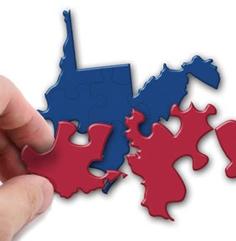